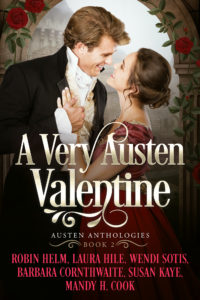 Experience uplifting romance, laugh-out-loud humor, and poignant regret as these authors deftly tug on your heartstrings this Valentine’s Day.

I Dream of You by Robin Helm

Newly-married Elizabeth Darcy has a plan: to charm her too-busy husband into desiring her company as much as he did when he was courting her. A series of romantic dreams gives her just the push she needs to put that plan into action.

My Forever Valentine by Wendi Sotis

Jane and Charles Bingley have married, even though Miss Elizabeth Bennet remains certain Mr. Fitzwilliam Darcy gave his best effort to keep them apart. After Mr. Darcy refused to stand up with Bingley and did not attend the wedding, she despises the gentleman more than ever and finds his company intolerable. How will she endure her visit to Kent if Mr. Darcy turns up everywhere she goes?

Pretence and Prejudice by Barbara Cornthwaite

A chance encounter with a handsome stranger forces Elizabeth to resort to subterfuge in order to discover his true intentions.

My Valentine by Mandy H. Cook

Little Charlotte was always determined and independent, traits which served her well as she battled a serious childhood illness and later as she took on Polite Society. Will those traits now deprive her of true love? Or would her lifelong Valentine win her heart?

The Lovers’ Ruse by Susan Kaye

In this Persuasion alteration, Anne is so altered by Wentworth’s love in the summer of 1806, she refuses to give him up when both her godmother and father try to persuade her. “The Lovers’ Ruse”follows Frederick and Anne through their whirlwind courtship and their secret engagement. When Wentworth returns for his Annie girl, the cat comes out of the bag.

As a reader and lover of Jane Austen and her works, this collection of six short stories whetted my appetite to reread the classics and watch a few Austen movies. The authors add a bit more depth to the familiar lives of beloved characters. I had never thought about Valentine’s Day or Valentines in the early 1800s, but these stories center around the love life of the participants through the words on Valentines or letters passing through their hands.

In this collection the reader meets Elizabeth and Darcy a year after their marriage when their love life needs a little attention. Then another story takes on the love entanglement of their daughter Charlotte years later. I love meeting their children! Two other stories concentrate on elements of ‘what if’ during their courtship. My Austen imagination soars believing the events transpired in real literature time.

Personally, I can never get enough of Austen! Thank you ladies for your creative imaginations and for sharing with all of the Austen fans.

I received a copy of this book in exchange for my honest review.

Robin Helm’s books reflect her love of music, as well as her fascination with the paranormal and science fiction.

Previously published works include The Guardian Trilogy: Guardian, SoulFire, and Legacy (a guardian angel protects a supernaturally gifted girl), the Yours by Design series: Accidentally Yours, Sincerely Yours, and Forever Yours (Fitzwilliam Darcy switches places in time with his descendant, Will Darcy), and Understanding Elizabeth (Regency sweet romance).

She lives in sunny South Carolina where she teaches piano and adores her one husband, two married daughters, and three grandchildren.

Do you love Historical romance, but avoid “those” covers like the plague?

Would you enjoy an anthology featuring six Valentine-themed novellas set in the Regency period written by Christian authors?

In A Very Austen Valentine, stories range from a young wife searching for a way to bring her marriage back to the way it was, to a laugh-out-loud courtship between Jane Austen’s worst snobs.

There is even a sequel featuring the children of the Darcys and the Brandons.

Every reader will find something to love in this wonderful collection.

Reflections from My Bookshelves, March 27

For Him and My Family, March 27

To celebrate her tour, Robin is giving away

Be sure to comment on the blog stops for nine extra entries into the giveaway! Click the link below to enter. https://promosimple.com/ps/ddfa/a-very-austen-valentine-celebration-tour-giveaway

Join 24 other subscribers
Follow Connect in Fiction with Marguerite Gray on WordPress.com